Which gaming centres and cafés in the UK host esports tournaments? Gaming cafés might be more popular in Asia than they are in the West, but several new centres have been cropping up in the UK in recent months and years. And they’re a great way of engaging with your local esports community.

We list the UK gaming centres which host esports tournaments and viewing parties in particular.

‘How can I find an esports team to join?’

‘I don’t know which game to look into or how to get started.’

These are a couple of the most common requests we receive at the British Esports Association.

While viewing Twitch streams and YouTube videos and exploring a game’s community on Twitter, Reddit and other channels can help you find out specific information, doing something in person can be more engaging and fun.

Visiting gaming centres, bars and cafés is a great way of getting to know gamers and esports fans in your local community, in a relaxed environment.

Those centres will typically host regular community tournaments or others with prizes, across a variety of games.

You might make some good friends, find a team to play in or just have a place to chill out and chat about gaming.

There are other gaming-themed bars and pubs like Loading and Secret Weapon, which are also great for socialising and playing, but we’ve included those that also offer an esports focus in this article.

Here’s a list of cafés in the UK that host tournaments:

Meltdown (pictured, top) is a bar for gamers which is dedicated to esports. Guests can come to drink, play, watch streams and meet likeminded people seven days a week.

It’s a cosy little bar and has a lot of regular community events and tournaments. Another one in Sheffield is opening in 2019. Caffeine Lounge is a centre dedicated to providing the perfect environment for esports teams, players, brands and sponsors.

It has the facilities to run internal and external tournaments from its state-of-the-art venue, with high-end gaming PCs and Xboxs running all the latest esports games.

There are also two booths dedicated for streaming and casting and a studio for live chat shows, as well as event space for any brand to come and launch a product and show everyone the power of their gear. Pixel wants to give the community experience in a pressurised offline setting to help develop UK talent. It shows major esports events on the big screens and customers can watch the events in their own private booths.

In December, Pixel Bar was rated the number one bar in Leeds on TripAdvisor thanks to its unique cocktails all based around the video games the staff love. It is dedicated to offering a unique lifestyle gaming experience and deliver high-end customer service. 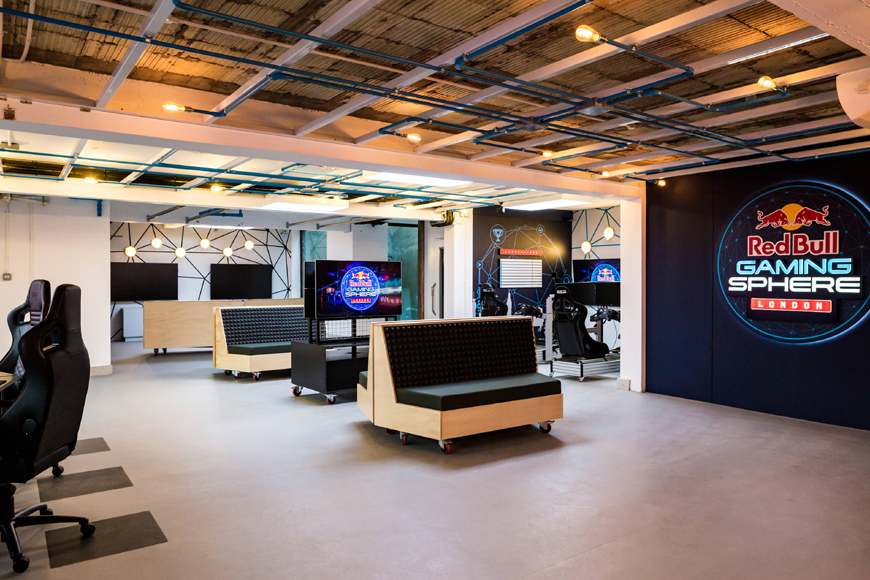 The Red Bull Gaming Sphere London is one of the UK’s largest public esports studios.

Pay it a visit and take part in weekly tournaments, challenge yourself to rise up the leaderboards or learn from esports professionals.

Esports.je offers small cash prizes as incentives in its tournaments, from £300 for a winning team in its CSGO tournament, for example.

As the fastest-growing gaming community in Cardiff, Talk & Surf has a strong community focus.

It hosts esports standard monthly tournaments and weekly meet-ups for the most popular games. The team post regular interesting content and even interviewed the area’s Labour representative about esports, ahead of the general election.

This is a video game and esports bar and restaurant, located in London.

“We’re all about those good vibes and we believe that video games, like all good things in life, are better when shared with friends, Happy Face pizza and a few drinks!” reads a blurb on the bar’s website.

“Platform is designed for everyone to enjoy regardless of your skill level. We give newcomers a helping hand, and veterans a steely glare and knowing nod.”

Xtreme Gaming says it’s the first dedicated console gaming centre in the UK and its goal is to give the community the best possible experience they can enjoy with friends, family or teammates.

It hosts community nights, works with developers and publishers and targets every type of gamer out there. It’s also one of the longest-running gaming centres in the UK, having been around for a decade already.

Engage Gaming has just opened in Aberdeen in the coming week, providing gaming enthusiasts with 180sq ft of gaming space in a venue to meet, play and compete.

It caters for everyone from after-school gaming clubs to summer camps and children’s parties to corporate teambuilding events and the more hardcore gamers.

While they’re not bars or cafés as such, GAME’s Belong gaming arenas do provide a place to take part in grassroots tournaments or play esports games with friends. They also host birthday parties and gatherings.

The Arena Clash store-versus-store nationwide tournaments offer cash and other prizes in games like League of Legends, Call of Duty, Mario Kart and more.

The retail chain has opened several over the past year, including these in the following locations:

Have we missed an esports café? Please email us and let us know

PrevPrevious ArticleWhat’s in a name? The eSports vs esports debate
Next articleHeir 4 preview: The UK’s biggest Smash Bros Melee tournamentNext