What’s in a name? The eSports vs esports debate At face value it might seem trivial, but to some the way esports is spelt (and pronounced) is an important thing to get right.

With esports being such a growing sector, there are still many sponsors, individuals and other companies getting involved in the industry for the first time. Many of whom write esports as ‘eSports’, ‘e-sports’ or even ‘e-gaming’.
The lack of consistency is understandable. Compared to many other traditional sports which have been around for hundreds of years, esports is still relatively new. In many ways the industry is still finding its feet and adapting as it continues to grow – that includes how it’s spelt.
To learn more about the basics of esports, visit our esports overview for non-fans.
For a while ‘eSports’ seemed to be the generally accepted term used to describe electronic sports, but several in the industry began pushing for ‘esports’. After all, ’email’ is not spelt ‘e-mail’ or ‘eMail’, is it? Why the odd capitalisation?

Thankfully, the argument has been settled (for the most part).
The Associated Press, a news agency whose content is published by many publications and broadcasters, recognised it as ‘esports’ in its latest style book back in March 2017. 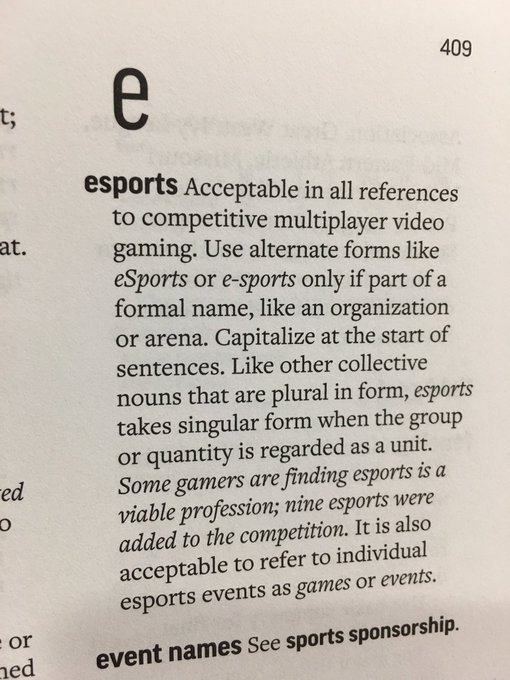 In case you missed page 409 of the new @APStylebook – here’s the #esports entry.

“What I think convinced a lot of the other committee members, was when we looked at Google Trends results and saw that people were searching for ‘esports’ without the hyphen at a rate of like 30 to 1 over ‘e-sports’ with a hyphen,” Oskar Garcia, assistant sports editor at the AP, told ESPN.

Paul ‘Redeye’ Chaloner, former esports broadcast host, has been an advocate on making sure people write the term correctly – making it a prominent part of his book ‘This is Esports (and How to Spell it)’.

He said: “I will follow up with a bit of friendly advice… don’t spell it wrong. It sounds trivial but this matters, in the same way that it would be odd if commentators started suddenly calling football ‘ a game of round things and rules’ on TV.” (Challoner, 2020)