National regulatory body the Gambling Commission is calling for parents to be vigilant to the dangers of gambling associated with video games and esports.

The warning follows the publication of a commission paper on virtual currencies, esports and social gaming.

The paper explains there has been an increase in the popularity of unregulated third-party websites offering gamers the opportunity to gamble on the outcome of esports tournaments with in-game items such as decorative digital guns and knives (known as skins).

One US report estimates the global skins gambling market was worth between $3.9bn and $5.1bn in 2016.

Many of these sites are illegal and last month the commission carried out a first-of-its-kind prosecution of two men running a FIFA game gambling website.

Gambling Commission CEO Sarah Harrison said: “Mums and dads could be giving money to a child thinking that they are playing a computer game when in fact they are gambling and this is real worry.

“Gambling on esports with in-game-items is growing and we need to make sure all gambling is fair, safe, crime-free and protects the young and vulnerable.” 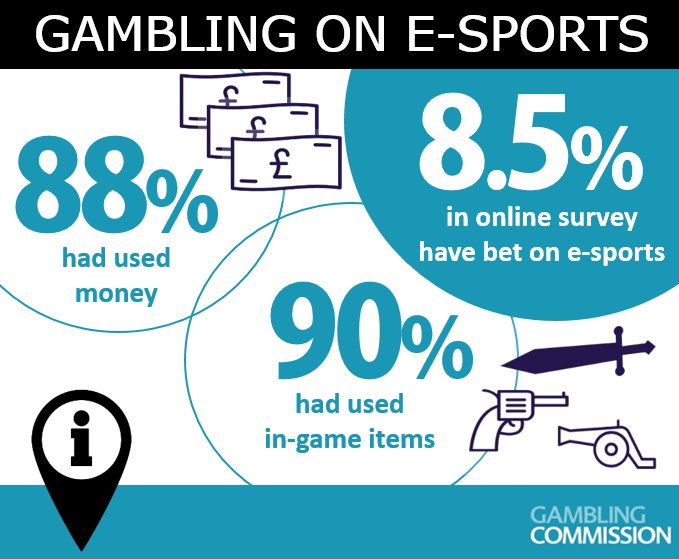 The paper has received Government support: Tracey Crouch, Parliamentary Under-Secretary for the Department for Culture, Media and Sport, has backed the commission’s warning.

She said: “It is vital that any form of gambling online is properly regulated and paramount that we protect children and vulnerable people.

“Esports is a phenomenon that gets bigger every day and is enjoyed by millions, but it is a concern that there are unlicensed websites jumping on the back of popular video games and encouraging children to gamble.

“The Gambling Commission has shown that it will take action and prosecute but it is important that parents are vigilant too and know about this risk to their children.

“These unlicensed websites are a hidden form of gambling – they’re parasites feeding off popular video games, presenting a clear and present danger to players including kids. Our prosecution last month demonstrates that we won’t hesitate to take action.”

The paper features a survey which indicates 8.5% of people have gambled on esports and 90% of those that gambled had done so with in-game items (skins).