Have you ever wanted to get your team involved in a Valorant scrim, but you are not sure how to get started?

Emma ‘Listo’ Liston, Alva Alliance Founder and Manager, and Niki ‘Juggler’ Livingstone, Esports Lecturer and Academy Coach, share their top tips for understanding what a scrim is, and the proper etiquette for playing in one for Valorant.

What is the purpose of a scrim?

Scrims are designed to allow you and your team to practise specific strategies in an environment which emulates a competitive match. This allows you to then analyse your strategies, strengths, and weaknesses based on how well they work against an opponent who is equally organised (which gives a more accurate result) – rather than running them in an empty lobby / ranked game.

There is no winning or losing in a scrim – in fact, it is the least important thing, and very often people’s perception of this will hold them back from correct practice and ultimately improvement.

FNC Boaster says it best in the 2022 Fnatic Valorant: Year One documentary: “We have lost so many scrims in preparation for this game so we are feeling really confident” – making the implication that it’s about the quantity and quality of practice, not the end result of a scrim.

When scrimming, you should have a specific practice focus planned out before-hand (usually these are informed by past VOD reviews or general improvement areas for your team), for example a scrim schedule might look like this:

‘Map: Icebox
Attacking side:
Pistol – Focus on tightening up utility usage and comms moving into A site.

Rounds 2-8 – Run Default 2 strat and focus on making decisions based on phase 1 of the strategy and information gathered. In post plants – focus on general discipline in all situations.
Rounds 9-12 – Practice fast B split – focusing on confidence in entry / comms and clearing site before planting.

Defending side:
Pistol – Focus on tightening up utility usage and comms moving into A site.

All rounds where they save – Practice anti-eco strat (focus on playing to not give up kills to 5 man pushes, early information on main power areas.
All other rounds – Practice re-takes, in all instances, play out the beginning of the round to gain info then give them site and practice re-taking.’

Setting up a scrim:

Scrims are most useful when playing teams of a similar ability, when searching for a scrim we suggest you use one of the following formats in your message or post, or something similar.

The most important information is clarity of the type of game: LFS (looking for a scrim), skill level, date and time + timezone, length (usually in quantity of maps).

The other information: Who will host, Captain Riot ID’s, map choices should be done through DM, unless you are happy to include your map choices in your initial post.

There are a few important settings to keep in mind when setting up a lobby for a Valorant scrim:
Allow Cheats: Allowing cheats enables teams to pause the match timer for tech issues/coach input and to use ghost mode (more on how and when to use this in the next section).

Tournament Mode: This serves no purpose in a scrim and can be left off.

Overtime: Win by Two: This serves no purpose in a scrim so doesn’t matter!

Play Out All Rounds: This is the most important. Scrims should allow for all 24 rounds to be played out so that both teams can practise both defence and attack for all 12 rounds.

Hide Match History: This is very important – teams would appreciate their map picks being kept secret from people who may be scouting their match history for clues. 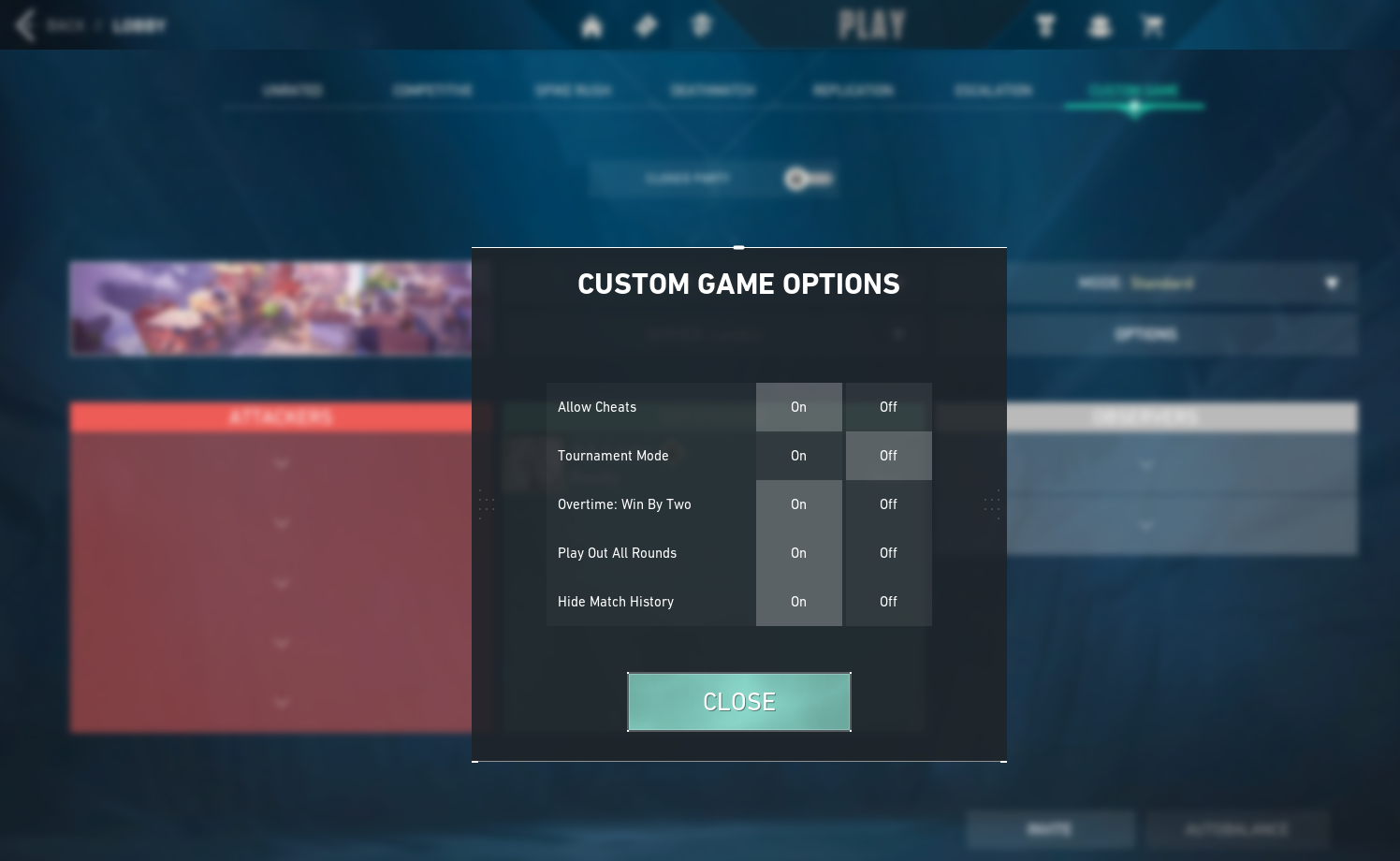 A coaches role during a scrim:

All coaches must sit in the designated coach slot in the lobby, not in an observer slot.

Active and Passive coaches
Active – Some teams may be scrimming with a coach who is actively engaging with the teams in comms throughout the entire scrim. Speaking during practice to promote good habits “5v4 don’t overpeek, freeze, don’t push, set up x crossfire, post plant etc.” Eventually reducing this once it becomes habits and a player picks up these comms. Then starts providing written feedback to players via. Messages during the match with key information “play x angle, don’t overheat etc”.

Passive  – Some teams will be at the stage where their coach is only in the scrim to take notes which can be talked about at the VOD review and point out small corrections in their play.

What coaches can do to utilise a teams scrim time:

Coaches do not replace an IGL in scrims, coaches cannot IGL in officials and so the player IGL should be encouraged to practise their IGLing in scrims themselves – a coach can still give pointers to the IGL but should not replace them in their role.

Common practice – The Do’s and Don’ts!

Are you a student or teacher and want to get involved in more Valorant action against other schools and colleges? Registrations for the Spring Season of the British Esports Student Champs are now open, with applications open until 11th January 2023.

You can also learn more about Valorant, and the in-game terminology, in our Game Jargon guide.