UK-based service agency and consultancy Code Red Esports has produced a useful infographic demonstrating the size and appeal of esports to those who aren’t familiar with it.

Esports is a hot topic and as such regularly attracts brands, companies, people and investors who may want to get involved but don’t know how, or understand how it all works.

Because of this, Code Red has put together a handy one pager on ‘the esports industry for the uneducated’.

It explains what esports is, whether it’s considered a sport or not, and includes info on prize winnings, player salaries, viewers and more. 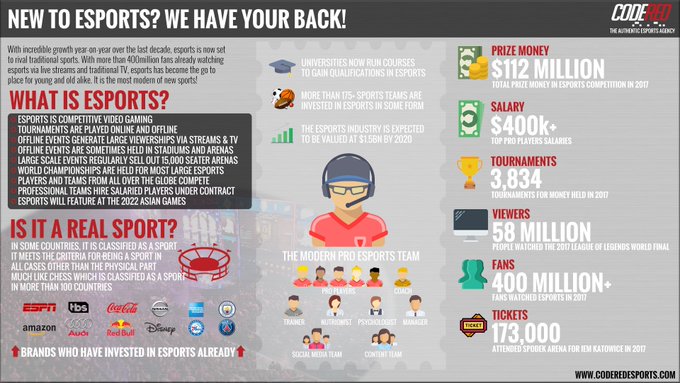 If you know someone who doesn’t get #esports or wants to understand the basics. Use this!

Updated and fresh for 2018. #EducateDontHate

“In light of the recent replies on the BBC announcements, this seems an apt time to post this up for all the uninformed, uneducated folk with their out-of-date stereotype views on esports. Feel free to put them right with this handy graphic!”

The infographic was published as Code Red announced the addition of South African esports talent to its roster. The company will be looking to develop and utilize them in future talent sourcing deals with ZA esports events and tournament organizers.

The six new people on Code Red’s books are as follows: